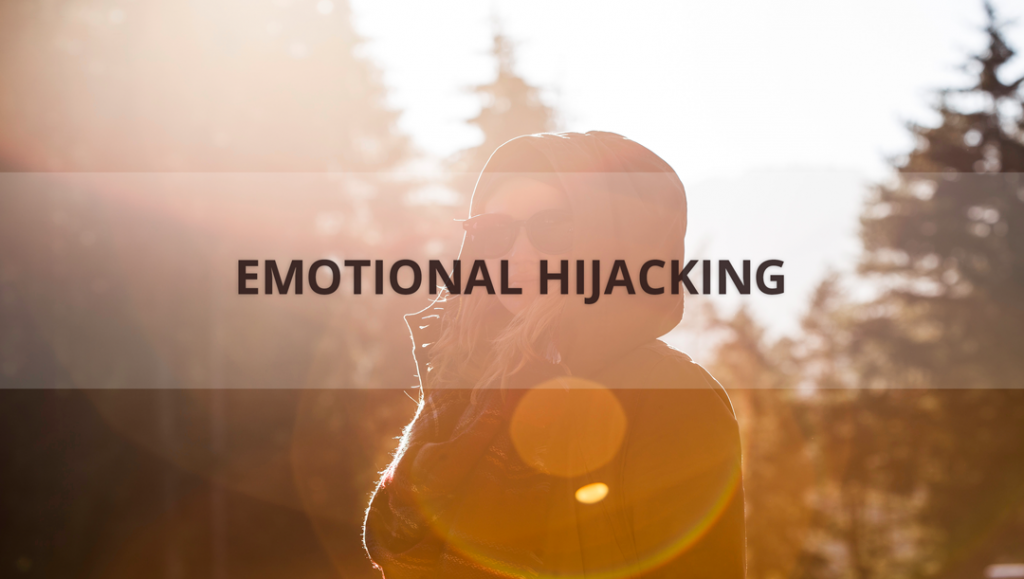 Action and speech conceived from inflated emotion will result in actions and speech that you’ll undoubtedly regret.

Every person faces thoughts and emotions that are fearful or hurtful. In these difficult moments,  self-governance will set you apart as a leader. In a world where many decisions are made out of emotions, you can model the way as you lead with wisdom.

Emotional hijacking is the condition when a person’s emotions take over their cognitive ability. Scientifically, it is where the reward center of the brain overrides the executive portion of the brain. Whereas healthy thinking, reasoning, and wisdom should be the source of our determinations at these times, during an “emotional hijack,” the fear-based emotions are in the driver’s seat.

It is important to understand this propensity in order to not trust the negative stress-filled emotions that want to control your actions and reactions. Self-governance will submit the emotions to wisdom when facing stressful or fearful situations.

I think about the times I opened my mouth and inserted my foot because of heightened emotions and stressful situations. I think about the occasions my hurt compelled me to confront immediately and the times I fearfully procrastinated when confrontation was needful. I remember the moments when I made decisions out of wounded feelings, offense, or disappointments rather than taking the time to process my thoughts and emotions in order to demonstrate mature leadership. It was a revolutionary time for me when I learned the Science behind the process of thought and how often emotions “take over” wisdom and lead to these unbeneficial and at times even harmful decisions.

How does an emotional hijack happen? Information enters through our five-senses. Within our brain we have a small almond-shaped structure called the amygdala which stores the memory of every emotional reaction. The information will reach the amygdala—emotional response—before the cerebral cortex—the thinking, reasoning and conscious part of our brain. It is a subconscious response to protect us from danger rather than waiting for the conscious brain to react. Adrenaline and epinephrine and other fear-based chemicals are released into our body causing a faster heart rate and a quick muscle response.

Have you ever reacted quickly putting on the breaks as your arm subconsciously swings out to protect the passenger? This is emotional hijacking and is a necessary neurological function to protect us from physical danger.

Here’s another example. One of the eight times I went on a bush safari in Kenya, East Africa we encountered the most volatile animal: the water buffalo. We learned they are quickly angered when you get “in their space” and will charge quickly. We were within six feet of the water buffalo as I watched it swing its head (first warning), kick his feet in the dirt (second warning) and begin to charge within seconds of our presence. This all happened so quickly as the driver, who was in an instant emotionally hijacked, put the pedal to the metal as we raced to get away from the angry and dangerous water buffalo. We were in a matatu, a van type vehicle, with rows of seats. Once we were safely away from the buffalo’s charge we discovered a young girl who was once in the very back of the matatu was now crouched between the driver’s seat and the passenger’s seat. How she got from the back of the matatu to the front without her or other’s knowledge was a perfectly illustrated “emotional hijacking” moment. Her fear-based reaction subconsciously took over to protect her from harm without her conscious mind’s involvement.

This was perfect in this physically threatening situation—response abandoned logical reasoning and acted immediately in order to keep her from physical harm. The problem, however, is when we react in fear to emotional threats. My feelings get hurt and I explode! I throw my computer on the floor because the document I was working on for eight hours “magically disappeared!” We see it on the news with road rage or crimes of passion (out-of-control emotions). It might be as simple as a child, or adult, throwing a temper tantrum. When we are dealing with emotional threats our brain wants to respond in the same way as with physical threats. This is dangerous, however, because these hijacking moments can and will be destructive to our leadership and sabotaging to our influence.

What do we do? How should we respond when our emotions want to commandeer our reasoning? Science acknowledges when a person is able to immediately recognize they are emotionally hijacking they are more able to submit it to wisdom. Ever hear someone say “just breathe?” That is sound advice worth taking because when you breathe calmly you are engaging your frontal cortex—the judgment and reasoning portion of your brain. When you sense these moments happening or about to happen, tell yourself to think rationally—keep the thinking part of your brain “turned on” when the emotions will want to ignore it completely.

Choose to have an attitude of thankfulness! It is very difficult to have two emotional responses at the same time. Will it be fear-based or wisdom-filled? Give your emotions time to recover before you make an important decision or confront a situation.

It’s important to know that the choices that you make, the responses you have, and the attitude you portray determine the results you obtain. It also determines the type of memory that you build and the emotional maturity you exhibit. Think about what you want to accomplish, how you want to lead, and the influence you want to have. Your thoughts and corresponding action will prophecy your future!

Remember, think about what you’re thinking about!

Looking through the lens of internal freedom empowers me to interpret my past with thankfulness, my present with courage, and my future with hope!